Home Laundry: To Vent or Not to Vent 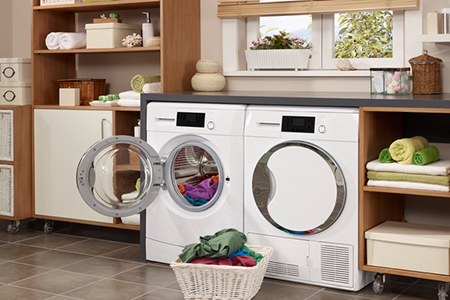 I once believed it was a forgone conclusion that when adding certain laundry appliances to a home, it would mean installing exhaust ducting and cutting a hole to the outside for venting.

However, a recent report from Michele Weaver at Design Basics, LLC highlighted a growing trend in ventless dryers that can be easily located and relocated within a home because vent piping, exhaust holes and venting to the outside are not needed.

The mechanics of a home dryer can cause energy and safety problems if lint becomes trapped in the vent. This demands more energy use and frequent cleaning. Weaver believes one of the major trends consumers will be seeing in these key appliances will be the further refinement of ductless technology.

She says vent hoses snaking through a home’s framing have become a leading cause of the 2,900 (average) home clothes dryer fires reported annually, according to the U.S. Fire Administration.

J.D. Wollf at HomeSteady.com recently explained that a ventless or condenser dryer— also known as a Heat Pump Clothes Dryer (HPCD)—doesn’t need a vent because instead of expelling the hot, moist air, a heat exchanger removes the moisture from the hot air and “recycles” it, passing it back through the drying clothes. The excess water is then drained away or caught in a container that is later emptied.

The trade-off for energy savings and safety is a requirement for slightly more maintenance than vented dryers. Wollf says the condensing unit must be cleaned about once a month to remove any lint.

A study at the Florida Solar Energy Center at the University of Central Florida states that while an unvented HPCD uses less electricity than a standard resistance dryer, it was found to release significantly more heat than a conventional dryer during operation, demanding additional cooling energy that may compromise overall savings.

However, the study points out that with a current retail cost of $948, there is only a small premium on the HPCD dryers, making them cost-effective when chosen at time of replacement.